A peek inside the history of Westminster Hall, where Queen Elizabeth lies in state

Amanda Connolly GlobalNews.ca
September 17, 2022  8:00 am
WATCH: Queen Elizabeth II is now lying in state at Westminster Hall as thousands of mourners line up to pay tribute.

As Queen Elizabeth II continues to lie in state ahead of her funeral on Monday, mourners gathering to pay their respects to the longest-reigning monarch in British history will do so inside a building that has borne witness to 900 years of monarchy, pageantry and tales straight from the history books – Westminster Hall.

And while it shares a name with the perhaps better-known Westminster Abbey where the queen was crowned, Westminster Hall has a history all of its own and is in fact nearly “the only part of the ancient Palace of Westminster which survives in almost its original form,” according to the British government.

History of Balmoral: The castle where Queen Elizabeth II spent her last days

Dating back to 1097, Westminster Hall was built by the son of William the Conquerer and spans more than 17,000 square feet. At the time it was built, it was “by far the largest hall in England, and probably in Europe at that time,” the government’s heritage website states.

It’s the oldest building on the parliamentary grounds, which includes sites like the U.K. Parliament buildings and the Big Ben clock tower, while Westminster Abbey lies across the street.

The first recorded feast in Westminster Hall took place in 1099, while throughout the centuries it has stood silent witness to significant historical events including the 1305 trial of William Wallace, the Scottish freedom fighter who inspired the popular film Braveheart.

Henry VIII, the English king notorious for his six wives and his break with the Catholic Church, held his coronation banquet in Westminster Hall in 1509.

Charles I was the first English king of that name and is often referred to in history books as a tyrant after dismissing Parliament for 11 years. He is also known for the grisly end he met – he was beheaded after being tried and found guilty of high treason against the realm during the Second English Civil War.

His execution ushered in a period of military rule in England, culminating in the naming of Oliver Cromwell as Lord Protector in Westminster Hall in 1653, before the restoration of the monarchy in 1661 with the crowning of Charles II, the son of Charles I.

The last coronation feast held in Westminster Hall was in 1821, when King George IV was crowned.

The building has survived revolt, the Great Fire of London in 1666, another fire which specifically destroyed most of the Palace of Westminster in 1834, an Irish republican bomb in 1885 and the German Blitz in 1941.

Both the House of Commons and Westminster Hall were hit by bombs and set ablaze on May 10, 1941. While the House of Commons chamber burned to ruble, Westminster Hall managed to avoid the same fate due to a former cabinet minister, Walter Elliot, who had rushed over to the site and directed the firefighters to focus their efforts on saving the medieval building over the newer House.

“After all, as he remarked to a friend years later, they could always build a new Commons Chamber, while the Hall was irreplaceable,” the U.K. heritage department explains.

“Not content with merely giving advice, Elliot personally smashed with an axe an opening through the locked doors of the Hall, so that hoses could be brought inside to play on the burning roof. The Hall was soon out of danger, but the Commons was reduced to ashes and rubble.” 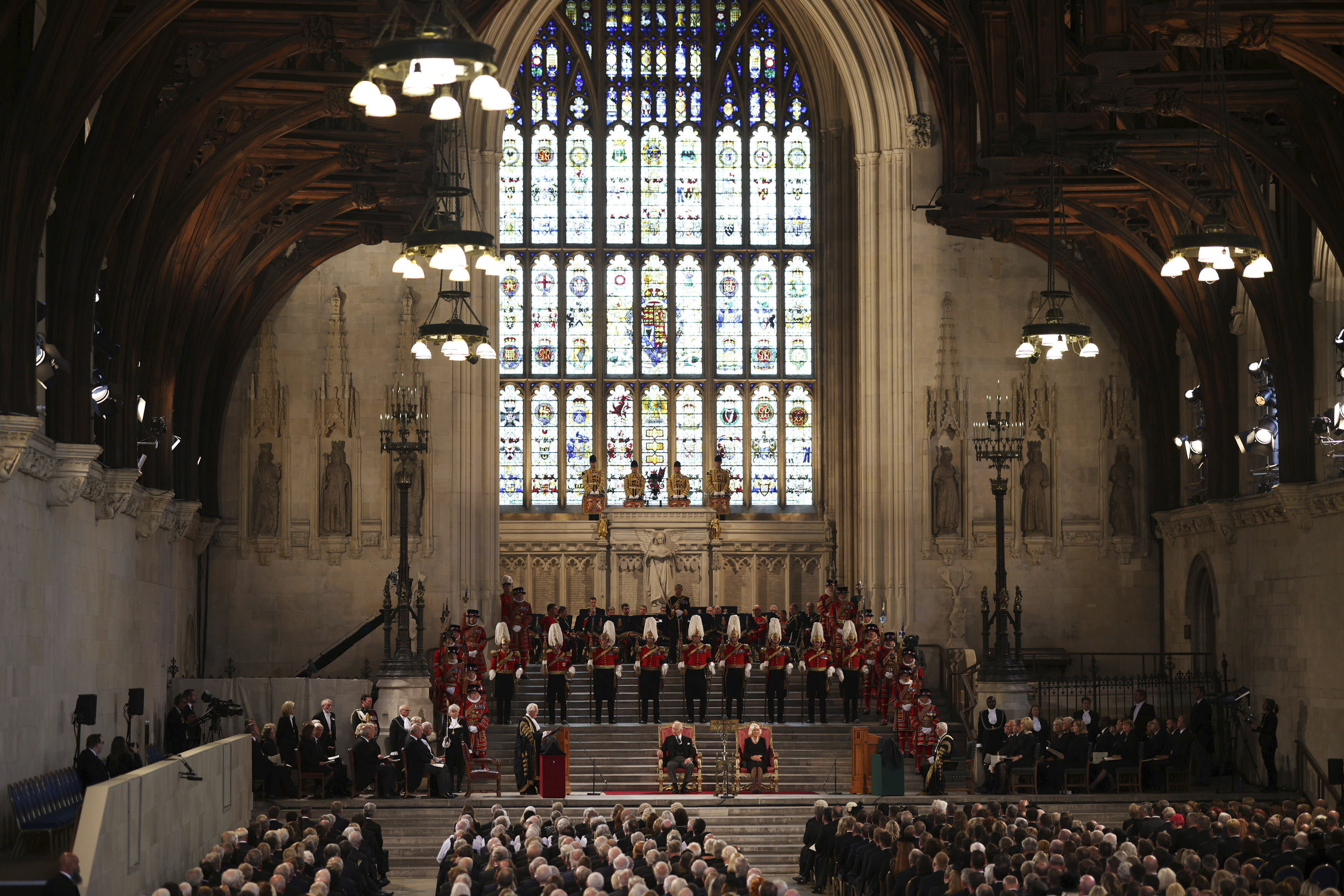 The roof of Westminster Hall is another key factor of the building’s significance.

While the current hammer-beam roof was commissioned in 1393 by King Richard II and was believed to be the largest timber roof in medieval northern Europe, according to the U.K. government’s heritage department, the question of what form the original roof took remains unanswered.

“The great mystery about the Hall is the form of its original roof. Not until the 13th or 14th century could carpenters create roofs significantly wider than the length of the available timber, and so it was assumed that a single or double row of columns was needed to support the Hall’s roof,” the department says.

“However, recent archaeological explorations found no evidence of these, and that the roof may have been self-supporting from the beginning.”

The chief mason largely credited with the design of the hammer-beam roof, Henry Yevele, was also involved in the major building projects at the Tower of London, Westminster Abbey and Canterbury Cathedral, that department states. 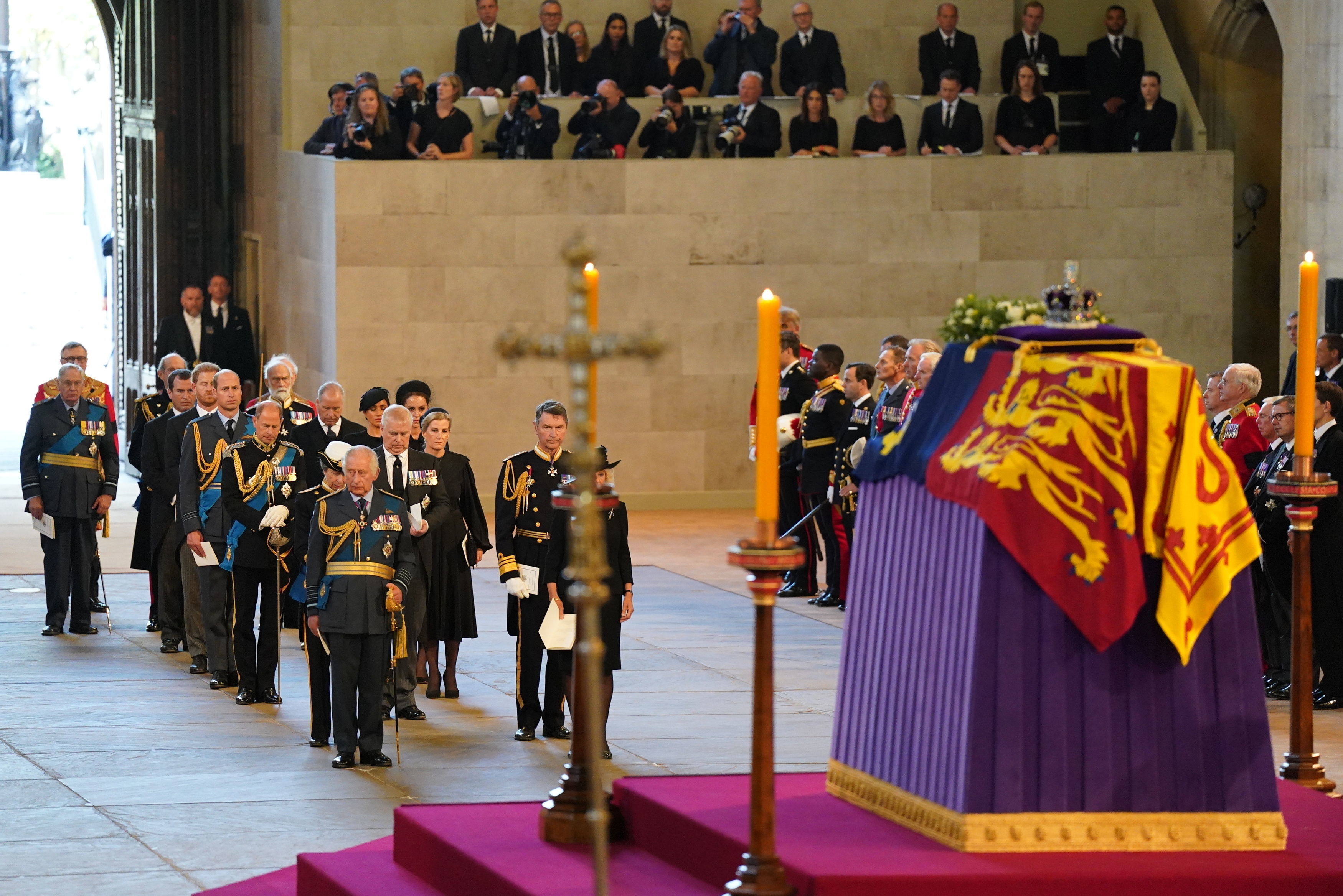 Within the spectacular stone walls of Westminster Hall have rested towering figures of British history, like wartime prime minister Winston Churchill and Queen Elizabeth II’s father King George VI during their periods of lying in state.

And now, Queen Elizabeth II rests among them, until early Monday morning when her coffin will be moved to nearby Westminster Abbey for her funeral.

Global News will carry special live coverage of the funeral on GlobalNews.ca.