There’s no shortage of problems in health care; transphobia prevents many Canadians from visiting doctors and emergency rooms, and getting tested for COVID-19, according to national surveys by TransPulse Canada. A lack of medical research, ignorant and/or inexperienced providers, cisnormative policies, racism and poverty — which some mitigate through crowdfunding for essential surgeries — are among other long-reported barriers to fulfilling unmet health needs.

Commentary:
Black trans women need the space to be listened to, supported

Shawn*, a trans man from Toronto who medically transitioned a decade ago, said his family doctor at the time misgendered him and refused to support his transition. 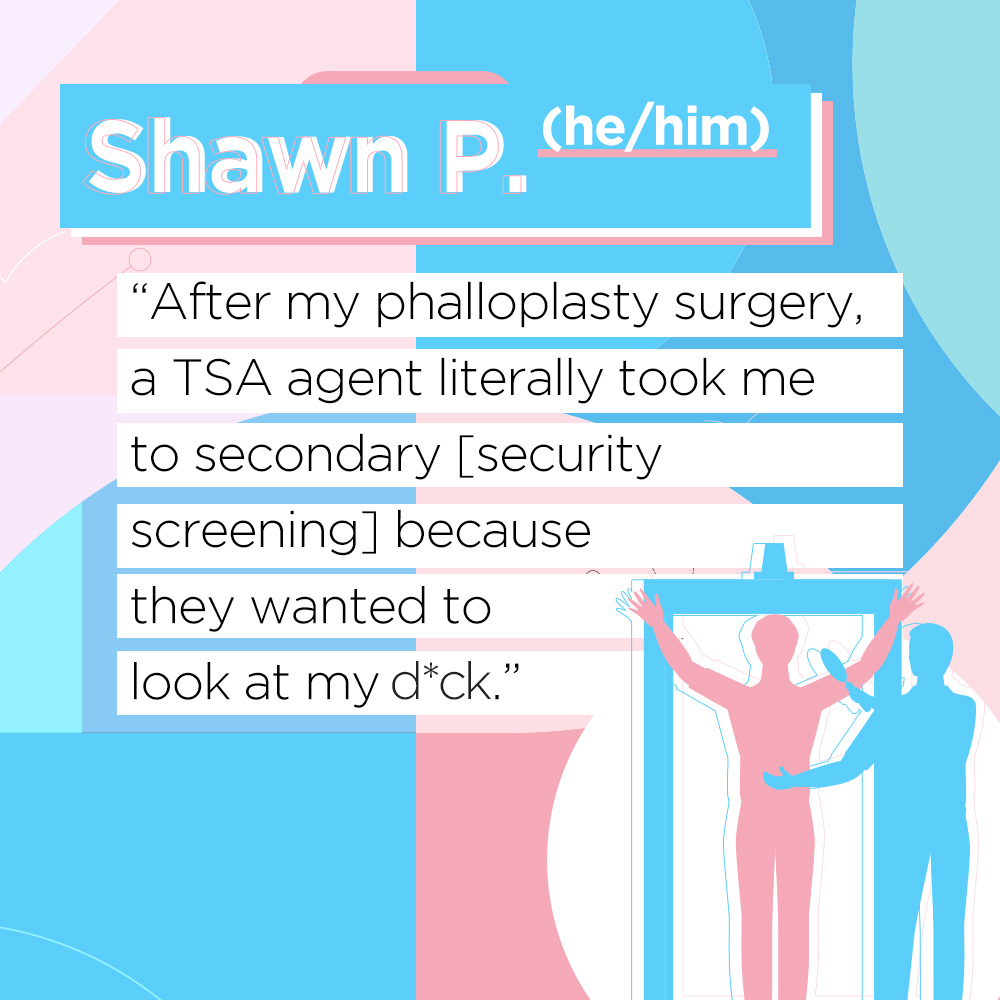 A multi-year wait-list for hormones made Shawn resort to self-medicating in 2011, taking testosterone given to him by a trans acquaintance he followed on YouTube. He also had a hard time getting bottom surgery, which, at the time, was best performed by specialists outside of Canada according to Shawn, and didn’t have as long of a wait-list.

“I wanted it for years, but I didn’t (get it) because I didn’t think I could access it,” Shawn told Global News.

It wasn’t until another trans man walked Shawn through the complicated paperwork that he was finally able to go through with the procedure. Since then, he’s paid it forward by writing guides that assist trans men and transmasculine people navigating the health-care system and apply for provincial government assistance.

It isn’t hyperbole to say this kind of informal community support can save lives, especially when the resources provided challenge gatekeeping. Erin Reed, a digital director at the American Independent, told Global News that a Google map she made listing U.S. clinics operating under an “informed consent” model has over a million views and has aided countless people looking for more supportive providers.

Hey y'all! Pinning this.

If you want to start HRT but you are nervous about gatekeeping, therapy, HRT letters, and don't know where to start… Here's a map of all informed consent HRT in the US.

“I get messages from people about (the map) all the time. They say things like, ‘I never would have been able to transition without this map,’ or ‘This map literally saved my life. I was close to ending it, then I found this and realized there was an informed consent clinic 10 miles from my house,’” she recalled. “It makes me want to cry, I’m so happy about it.” 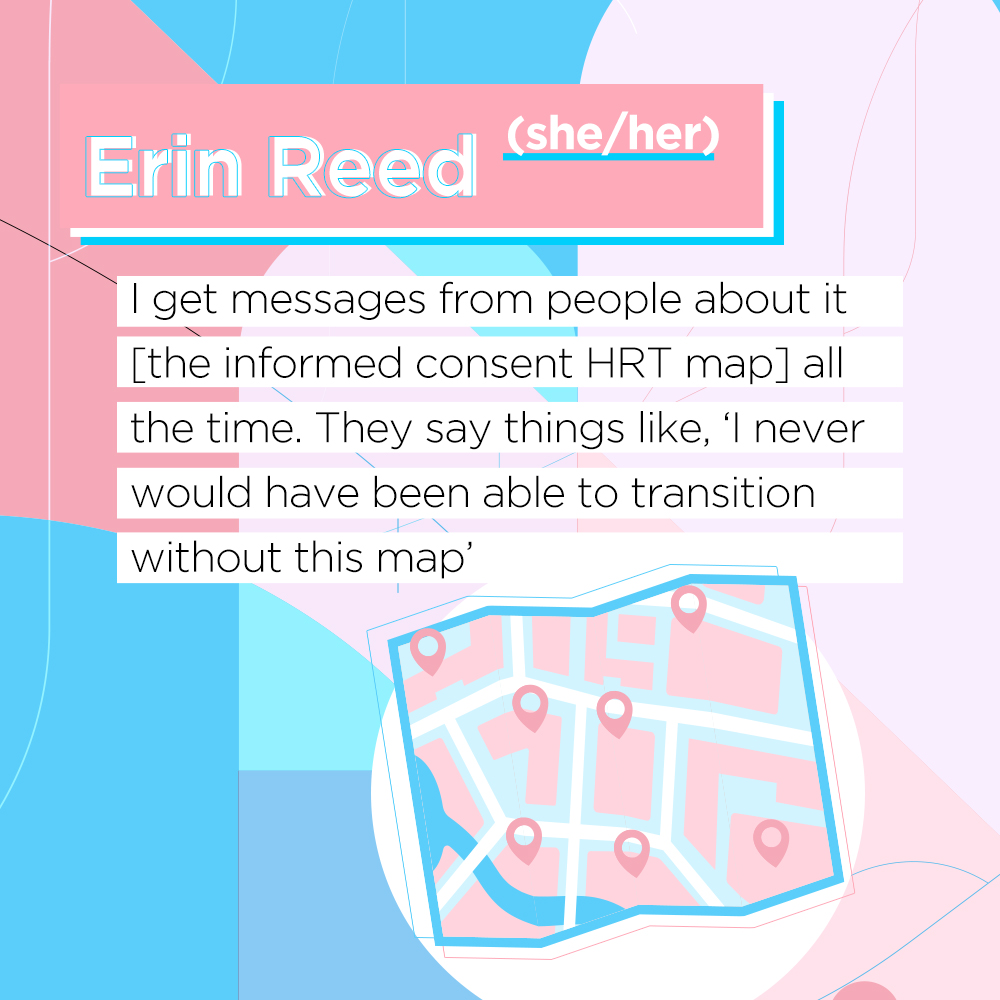 The help of people like Shawn and Reed can be found online via forums and social media, with journalism by trans writers playing a role in giving in-community conversations gravitas and furthering reach: Canadian journalist Alex V. Green’s stories on DIY transitions in 2018 and the controversial use of spironolactone in 2019 are some examples of stories that have helped people make informed decisions about body changes.

Vice producer Alyza Enriquez’s personal account on low-dosing testosterone to affirm their non-binary identity, and writer Samantha Riedel’s interviews with trans women who get menstrual symptoms are other notable works that have raised awareness about experiences not often brought up in doctor appointments.

To promote accessible trans wellness on TDOV, Global News asked several people to share the informal advice they were once given by another trans person. (It’s always ideal to consult with your doctor before changing or starting a new treatment plan. When that’s not possible, research and reach out to trusted community members for best practices).

“What’s one health tip you wish other trans people knew about?”

Elliott Kozuch
“Avoid testosterone gel if you live with a cat, because accidental transference could be dangerous.” 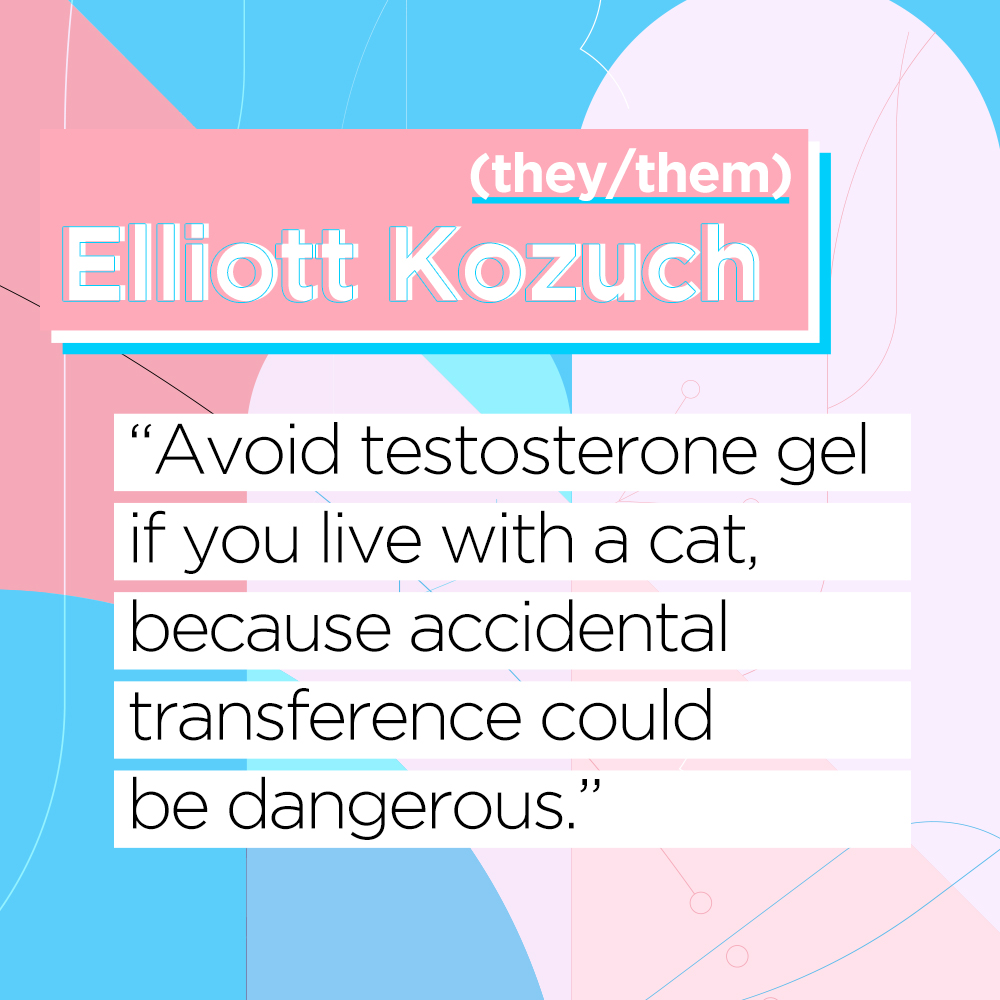 Vic*
“I learned from a friend that you can just keep taking your birth control if you aren’t on HRT (hormone replacement therapy) and want to not have periods. Take it straight through your month and skip the little placebo pills, depending on the kind you use.” 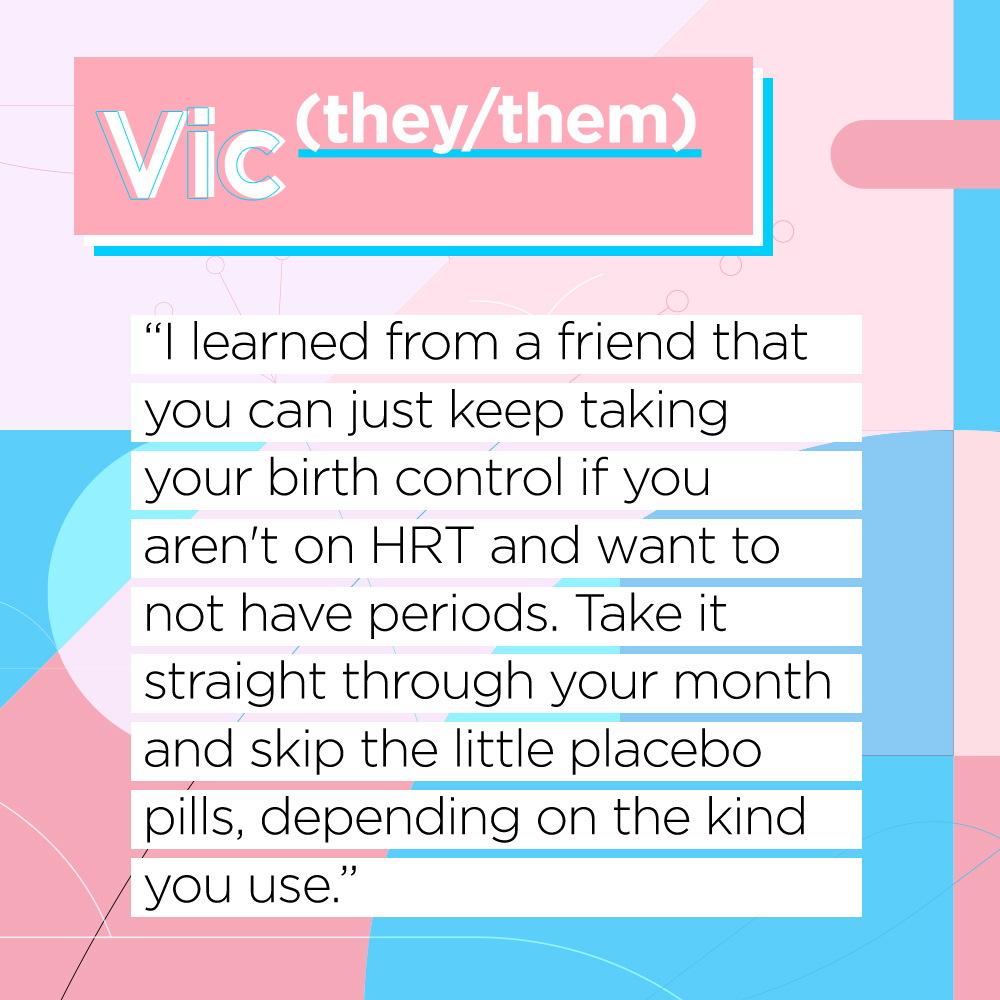 Evy*
For trans women and transfemmes: “Instead of swallowing estradiol pills, they should be taken sublingually (under the tongue) if possible — and it is generally possible. This vastly helps the estrogen actually get absorbed and not just wasted in the liver.” 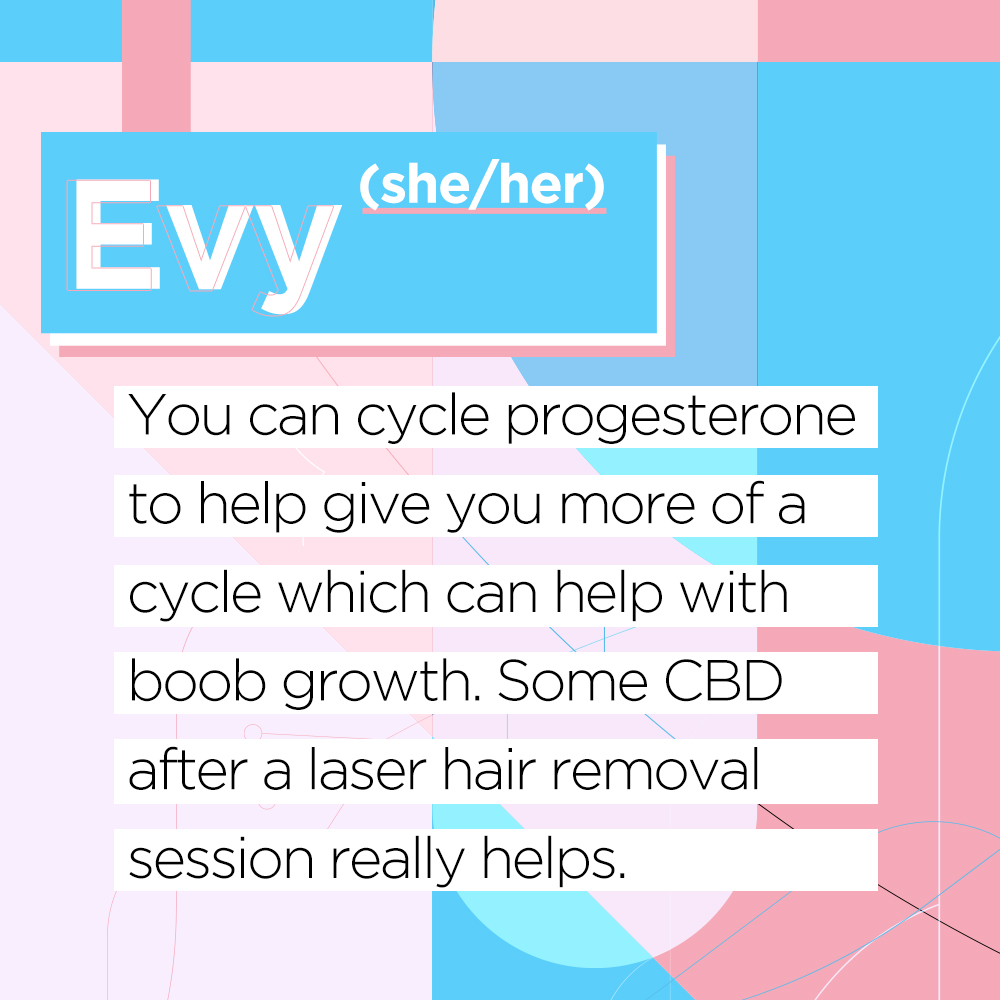 Some CBD after a laser hair removal session really helps.

You can cycle progesterone (take it periodically, instead of consistently), which can help with boob growth. It’s one of those things that’s very much ‘your mileage may vary,’ more folk wisdom then something that is a known thing.

Newton Brophy
“After you inject, it helps to lightly massage the area… apparently there’s a common allergy to the oil that testosterone is suspended in, not testosterone itself. It doesn’t happen to everyone, but sometimes the injection site will be red and itchy for two or three days. If that happens to you, it might be this allergy.” 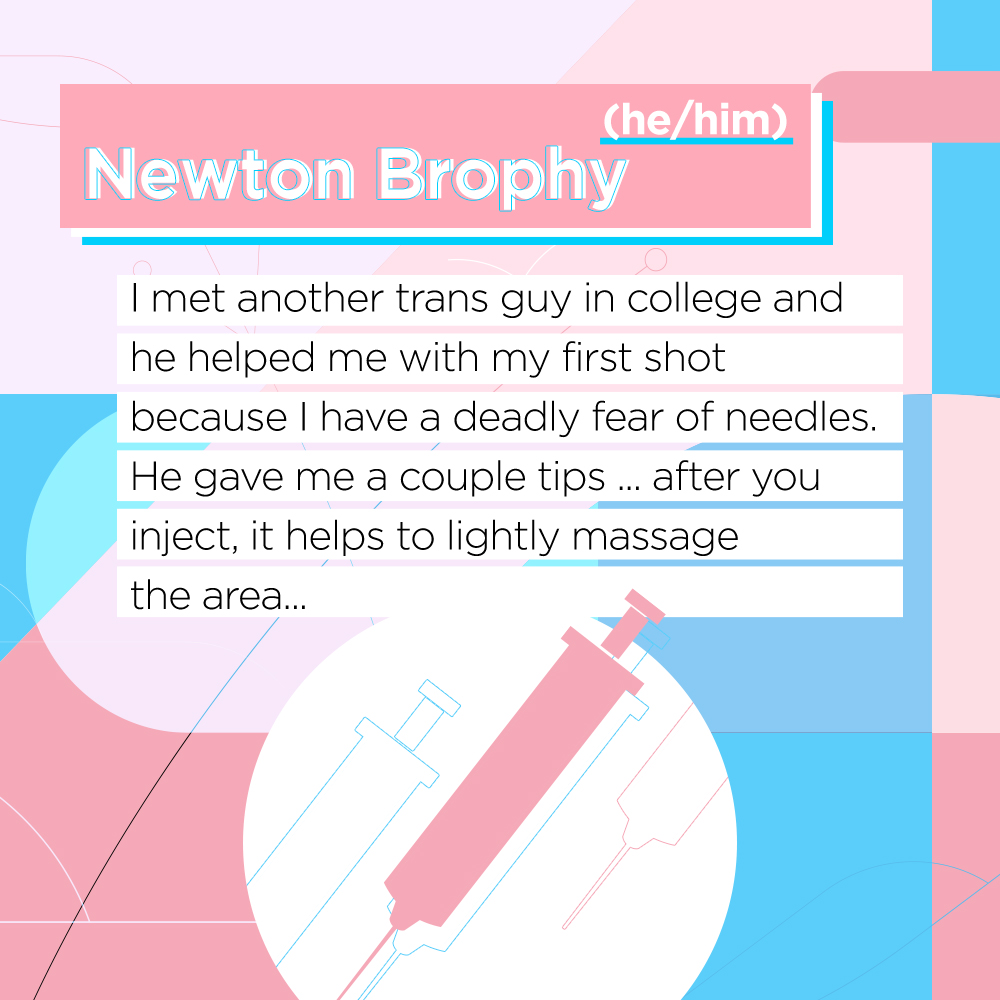 “Prior to my orchiectomy, I was very nervous that my sex life would be destroyed. While that didn’t turn out to be the case, my ability to get erections was affected. I find taking extra T the day before I want an erection works way better than Cialis (a sexual function medication) and way cheaper. It also boosts my mood when I’m feeling lethargic or down. 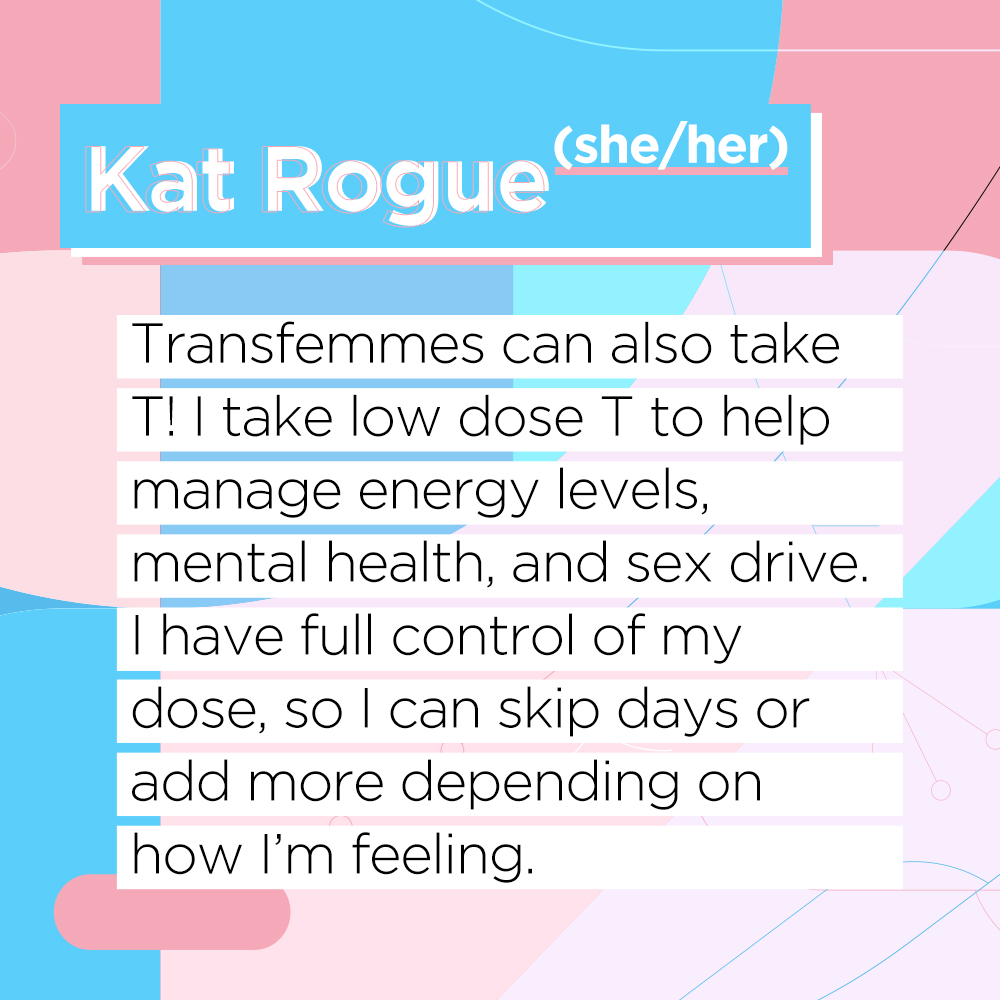 “That being said, every test comes back completely within the cis female range of testosterone. As far as I’m concerned, the extra T makes up for testosterone that a cis woman’s body produces with her ovaries and adrenal glands … if a T gel packet at full dose lasts a transmasc person a day or two, mine lasts me a month or two. It’s very minimal and fully tested by my endocrinologist.”

Sasha Campbell
“One thing that a lot of people don’t know is that pharmacists dispense meds, but they can also help with figuring out issues. You can ask them, ‘Is there a way to get this medication covered?’ or ‘What are the side effects if I switch to this dose?’ 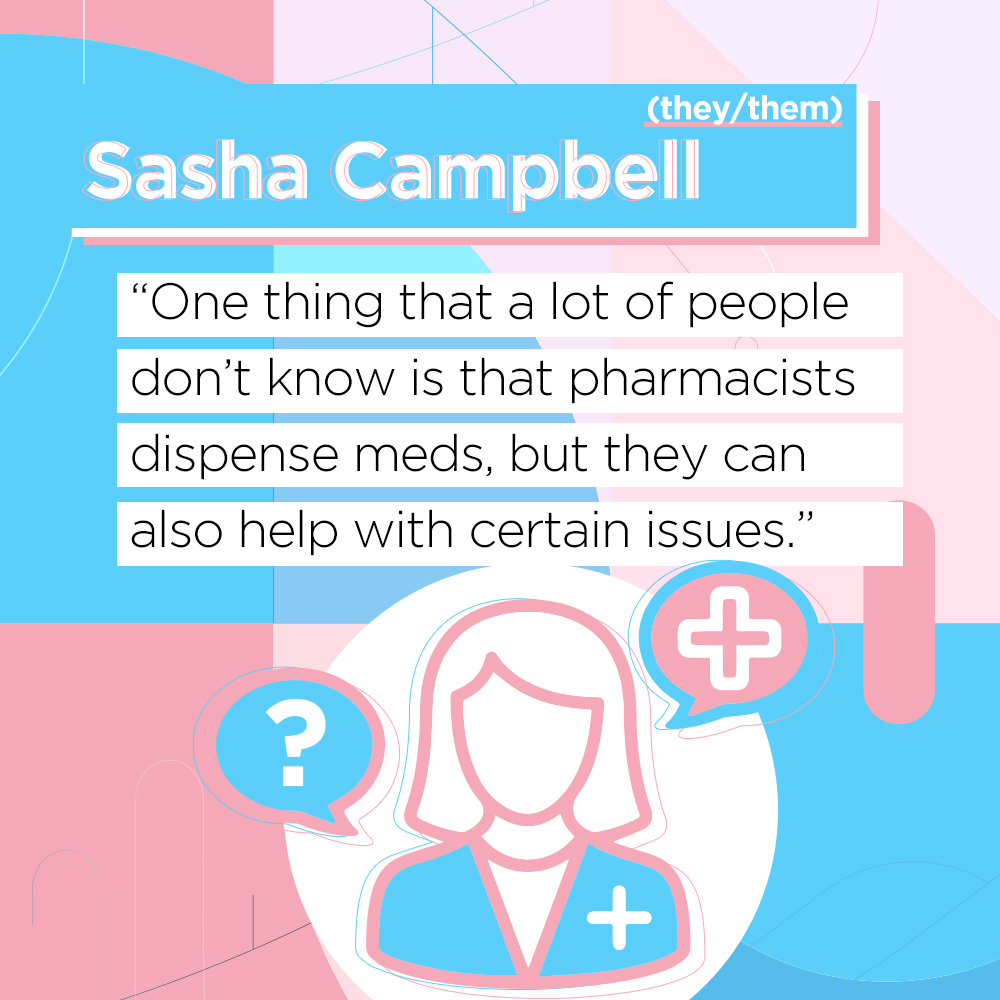 Sasha Campbell, a Canadian pharmacist who shared their advice above, acknowledges the challenges of troubleshooting concerns with providers and the scarcity of trans representation in health care, but points out that progress is slowly being made. Some of this includes publishing more research and creating comprehensive resources, like Sherbourne Health’s guidelines for primary providers of trans and non-binary patients.

Read more:
Why trans people need to be included in the gender-based violence conversation

Cis service providers should also take it upon themselves to learn, by taking trans-centred courses like those offered by Rainbow Health Ontario. Even without formal learning, Campbell says it’s “not difficult to assess someone for risks and monitor them. It’s just new for them.”

For Kat Rogue and others interviewed, they believe community care for a trans person’s overall health is best until the institutions controlling medical access can provide more autonomy and care.

“If you think you’re being gatekept, reach out to trans people,” she said. “We’re the only ones who are going to save us.”

*First names were used for several interview subjects in order to protect them from transphobia.

Al Donato is a non-binary freelance journalist and podcaster based in Toronto. Their bylines can be found at HuffPost Canada, among others. Al can be reached on Twitter at @gollydrat.